I’m a Hazmat – Trained Hospital Worker: Here’s What No One Is Telling You About Ebola – by Abby Norman

By Abby Norman Become a fan   Writer and healthcare scientist.

I’m a Hazmat-Trained Hospital Worker: Here’s What No One Is Telling You About Ebola

It is a superior virus that has evolved and fine-tuned its mechanism of transmission to be near-perfect. That’s why we’re all so terrified. We know we can’t destroy it. All we can do is try to divert it, outrun it.

I’ve worked in health care for a few years now. One of the first things I took advantage of was training to become FEMA-certified for hazmat ops in a hospital setting. My rationale for this was that, in my home state of Maine, natural disasters are almost a given. We’re also, though you may not know it, a state that has many major ports that receive hazardous liquids from ships and transport them inland. In the back of my mind, of course, I was aware that any hospital in the world could potentially find itself at the epicenter of a scene from The Hot Zone. That was several years ago. Today I’m thinking, by God, I might actually have to use this training. Mostly, though, I’m aware of just that — that I did receive training. Lots of it. Because you can’t just expect any nurse or any doctor or any health care worker or layperson to understand the deconning procedures by way of some kind of pamphlet or 10-minute training video. Not only is it mentally rigorous, but it’s physically exhausting. 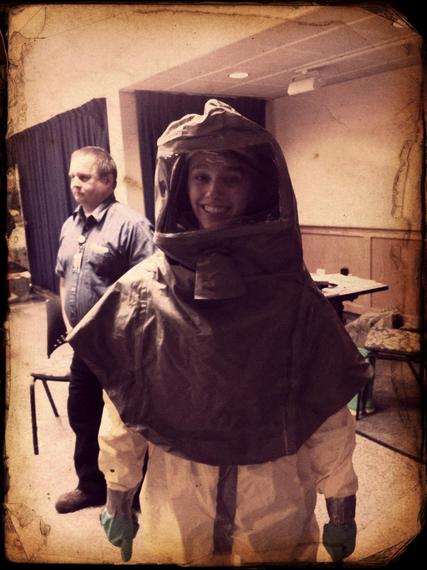 PPE, or, personal protective equipment, is sort of a catch-all phrase for the suits, booties, gloves, hoods and in many cases respirators worn by individuals who are entering a hot zone. These suits are incredibly difficult to move in. You are wearing several layers of gloves, which limits your dexterity to basically nil, the hoods limit the scope of your vision — especially your peripheral vision, which all but disappears. The suits are hot – almost unbearably so. The respirator gives you clean air, but not cool air. These suits are for protection, not comfort. Before you even suit up, your vitals need to be taken. You can’t perform in the suit for more than about a half hour at a time — if you make it that long. Heat stroke is almost a given at that point. You have to be fully hydrated and calm before you even step into the suit. By the time you come out of it, and your vitals are taken again, you’re likely to be feeling the impact — you may not have taken more than a few steps in the suit, but you’ll feel like you’ve run a marathon on a 90-degree day.

Getting the suit on is easy enough, but it requires team work. Your gloves, all layers of them, are taped to your suit. This provides an extra layer of protection and also limits your movement. There is a very specific way to tape all the way around so that there are no gaps or “tenting” of the tape. If you don’t do this properly, there ends up being more than enough open pockets for contamination to seep in.

If you’re wearing a respirator, it needs to be tested prior to donning to make sure it is in good condition and that the filter has been changed recently, so that it will do its job. Ebola is not airborne. It is not like influenza, which spreads on particles that you sneeze or cough. However, Ebola lives in vomit, diarrhea and saliva  – and these avenues for infection can travel. Projectile vomiting is called so for a reason. Particles that are in vomit may aerosolize at the moment the patient vomits. This is why if the nurses in Dallas were in the room when the first patient, Thomas Duncan, was actively vomiting, it would be fairly easy for them to become infected. Especially if they were not utilizing their PPE correctly.

The other consideration is this: The “doffing” procedure, that is, the removal of PPE, is the most crucial part. It is also the point at which the majority of mistakes are made, and my guess is that this is what happened in Dallas.

The PPE, if worn correctly, does an excellent job of protecting you while you are wearing it. But eventually you’ll need to take it off. Before you begin, you need to decon the outside of the PPE. That’s the first thing. This is often done in the field with hoses or mobile showers/tents. Once this crucial step has occurred, the removal of PPE needs to be done in pairs. You cannot safely remove it by yourself. One reason you are wearing several sets of gloves is so that you have sterile gloves beneath your exterior gloves that will help you to get out of your suit. The procedure for this is taught in FEMA courses, and you run drills with a buddy over and over again until you get it right. You remove the tape and discard it. You throw it away from you. You step out of your boots  –  careful not to let your body touch the sides. Your partner helps you to slither out of the suit, again, not touching the outside of it. This is difficult, and it cannot be rushed. The respirators need to be deconned, batteries changed, filters changed. The hoods, once deconnned, need to be stored properly. If the suits are disposable, they need to be disposed of properly. If not, they need to be thoroughly deconned and stored safely. And they always need to be checked for rips, tears, holes, punctures or any other even tiny, practically invisible openings that could make the suit vulnerable.

Can anyone tell me if this happened in Dallas?

We run at least an annual drill at my hospital each year. We are a small hospital and thus are a small emergency response team. But because we make a point to review our protocols, train our staff (actually practice donning/doffing gear), I realized this week that this puts us ahead at some much larger and more notable hospitals in the United States. Every hospital should be running these types of emergency response drills yearly, at least. To hear that the nurses in Dallas reported that there were no protocols at their hospital broke my heart. Their health care system failed them. In the United States we always talk about how the health care system is failing patients, but the truth is, it has failed its employees too. Not just doctors and nurses, but allied health professionals as well. The presence of Ebola on American soil has drawn out the true vulnerabilities in the health care system, and they are not fiscally based. We spend trillions of dollars on health care in this country — yet the allocation of those funds are grossly disproportionate to how other countries spend their health care expenditures. We aren’t focused on population health. Now, with Ebola threatening our population, the truth is out.

Health care operates in silos — we can’t properly isolate our patients, but we sure as hell can isolate ourselves as health care workers.

As we slide now into flu season, into a time of year when we are normally braced for winter diseases, colds, flus, sick days and cancelled plans, the American people has also now been truly exposed to another disease entirely: the excruciating truth about our health care system’s dysfunction — and the prognosis doesn’t look good.

Note: In response to some comments, I would like to clarify that I am FEMA-trained in level 3 hazmat in a hospital setting. I am a student, health guide and writer, but I am not a nurse.

close
No account yet? Create an Account
Sidebar Scroll To Top
Due to pandemic-related safety protocol, we are currently accepting pre-tax orders of $100.00 or more. Thank you!